One of Tina Konyot’s colleagues says “She rides beyond competition, with an excitement that emanates from her and broadcasts to those watching that something brilliant and extraordinary is taking place.”

It’s hardly a surprise. Tina Konyot has horses—and performing—in her bloodlines. Dating back five generations her family has trained horses, danced in ballets and performed in circuses. Tina was born to ride.

Her grandfather, Arthur Konyot, performed for Ringling Brothers and Barnum and Bailey circuses, and trained horses for celebrities such as Arthur Godfrey. Her grandmother, Manya, was a Russian ballerina who practiced dressage as well. Father Alex was born in Budapest, Hungary, while her mother, high wire artist Josephine Berosini, came from Pilsen, Czechoslovakia. The two met in Liverpool, England when their entertainment worlds intertwined.

Photos of Tina show her sitting as a baby in front of her father’s saddle as they rode. Tina loved it from the start, heading for the stable the second she got home from school. Tina’s riding had a “take no prisoners” approach. She rode with no hands, no saddles, and sometimes with an umbrella if it was raining. For Tina, “It was more comfortable for me to sit on a horse than to sit on the couch.”

Growing up Tina rode with her dad, who ran a riding school in Fort Lauderdale, Florida.  His reputation as a “genius with horses” attracted top-notch riders and horses to his school. He taught many greats in his 80-year career, including a very young Robert Dover. Robert says, “He was a genius who gave me key information at a very crucial time in my development as a rider.” 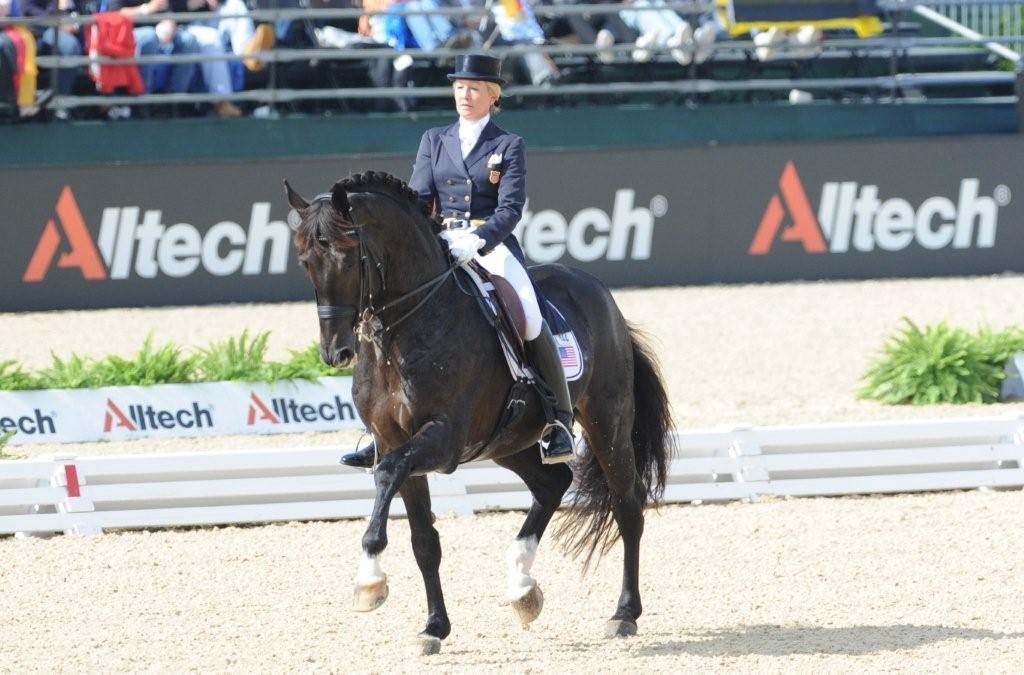 Later, Tina rode with Herbert Rehbein in Germany whom she says was her “biggest influence in the competitive world of dressage.” Other teachers included Rudolph Zeilinger and Klaus Balkenhol.

Tina still has her first dressage horse, now 28 years old, as well as another former competitive mount, 19. Along with a donkey, they wander around loose on Tina’s property. Calecto can look forward to the same future. “I’ll have him as long as he lives.”

Tina first spotted Calecto (she calls him “Smoochy”) at an auction in Denmark.  He wasn’t outrageously expensive, so he was affordable. But he wasn’t being ridden well and thus hadn’t sold. In fact, there wasn’t one bid on him.

He did, thought Tina, have a beautiful canter and a nice walk. She rode him five times and ended up purchasing him a few months later. The man who bred Calecto felt that it was a great match, that Tina could make something special out of the horse.

Tina’s decision to buy Calecto wasn’t a popular one. In fact, the consensus seemed to be that the horse would never go far. No one else had any confidence in his  ability. In fact, some other competitors were heard to say that he wasn’t a horse that they would worry about competing against.

They soon learned that they were wrong. Tina says, “To buy an expensive Grand Prix horse and ride it well is great. But to bring them up on your own and do well, that’s in a different league, a league all of its own. When you do that, you create such a bond between an animal and a person.”  She cites Ashley Holzer and Pop Art as an example.

Tina is incredibly proud of Calecto, and of how far he has come.  When she got him, “He had no personality. He just stood in a corner with his head down. He had ulcers and was quite thin when I got him because he wouldn’t eat.” Calecto came from a huge breeding farm with over 600 horses. He was nothing but a number at the farm.

Now, says Tina, “Calecto is a changed horse.” He comes out of his stall “very, very fresh. He’s a totally different animal.” With his weight gain and muscle, he’s “twice the size of when I bought him, and he has so much personality. No one can believe the change in him!”

In fact, he became so much horse that at one point Tina thought to herself, “What am I doing?”

Tina’s philosophy is evident in her teaching as well as her riding and performing.  “It’s all about being fair to the horse. Sometimes miscommunication can occur.  It’s not fair to the horse. You have to be clear and people should be as quick to reward when the horse earns it, as to punish.”

When working with her horses, Tina says, “Every horse is an individual. What their issues are every day is different.”  Some days she’ll take it easy and just go on a trail ride. Other days, she asks more of her horses.

Tina is proud of Calecto at every show. Riders who thought they had nothing to fear from Calecto have been forced to sit up and take notice.  Among Tina’s proudest moments have been winning the Grand Prix Freestyle at Dressage at Devon and taking a second in the Grand Prix there, breaking the 70 % barrier in the Wellington Classic Spring Challenge CDI, and qualifying to ride for the United States in the World Equestrian Games.

Qualifying, says Tina, “felt fantastic, it’s what you work for.”  It was the first time she rode for her country. “I felt honored; it’s a very special achievement.”

Riding on a team is, naturally, different than riding for yourself.  “You want to do well for your team.”  Tina was lucky in the fact that teammates Todd Flettrich and Katherine Bateson-Chandler are friends, so there was a comfort zone for all of them.   And she enjoys the atmosphere of competing with all the other disciplines on the same grounds. In that way, “It’s similar to Europe.”

She was disappointed in her own rides. “I knew I could have done better. We did so well at Aachen; it was very, very special to be in the top ten in that company. But at WEG I rode my horse off his feet in the Grand Prix special. You live with it, you don’t dwell on it. You have one extra cocktail that day and then you learn from it and go on.”

It’s not solely Tina’s, and Calecto’s, talent that makes them stand out from the pack.  FEI Olympic judge Axel Steiner says, “There are many riders, but there are only a very few who are true partners with their horse. Tina is one of them.”