Chosen by a Pony

Chosen by a Pony

It started when she was a baby. There was nothing Aiva Gamelin wanted more than to be around horses and ponies. And she didn’t just want to be around them, she wanted to ride. From the second she was lifted onto the back of a pony, that was the place Aiva wanted to be. In fact, she didn’t want to get off. Soon she began climbing on anything within reach, including goats, dogs, and other unwilling participants. She shared that pursuit with her dolls, whom she placed atop anything that moved so they too could experience the joy of riding. 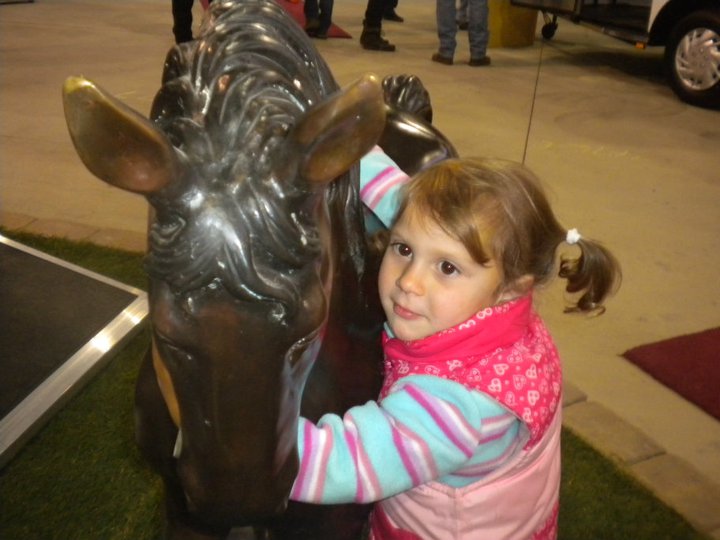 At two, Aiva was riding independently. As tiny as she was, she began helping her grandmother hay the horses. She added grooming when she was three, brushing the legs of horses and ponies up as high as she could reach. And by six she was fully immersed in all barn chores, helping clean stalls, groom, feed…whatever it was that needed doing.

A third generation equestrian, Aiva is descended from Sue Peterson, the owner/ trainer for Another Farm in Woodbury, Connecticut, and Sue’s daughter Yvonne. Sue and Yvonne were thrilled at Aiva’s interest in the sport at such a young age, and Aiva quickly became her grandmother’s sidekick.
In no time, one pony wasn’t enough for Aiva and she started riding several ponies or horses a day. Sometimes she rode bareback, or without stirrups. Riding so many different mounts, Aiva learned at an early age to adapt to each horse or pony. She learned an important lesson: not to force them to adapt to her, but instead to meet them in the middle.
Although some of the horses and ponies at Another Farm are green, or too small for the more experienced riders to school, that doesn’t stop Aiva. She rides them all. In addition, she doesn’t cut corners. Understanding the importance of groundwork, Aiva spends a good amount of time practicing it with the greenies.
The ambience at Another Farm comes in handy for curing spooky horses. The zoo-like atmosphere with chickens, goats (free roaming), sheep, and alpacas everywhere, assists Aiva with her de-spooking training. 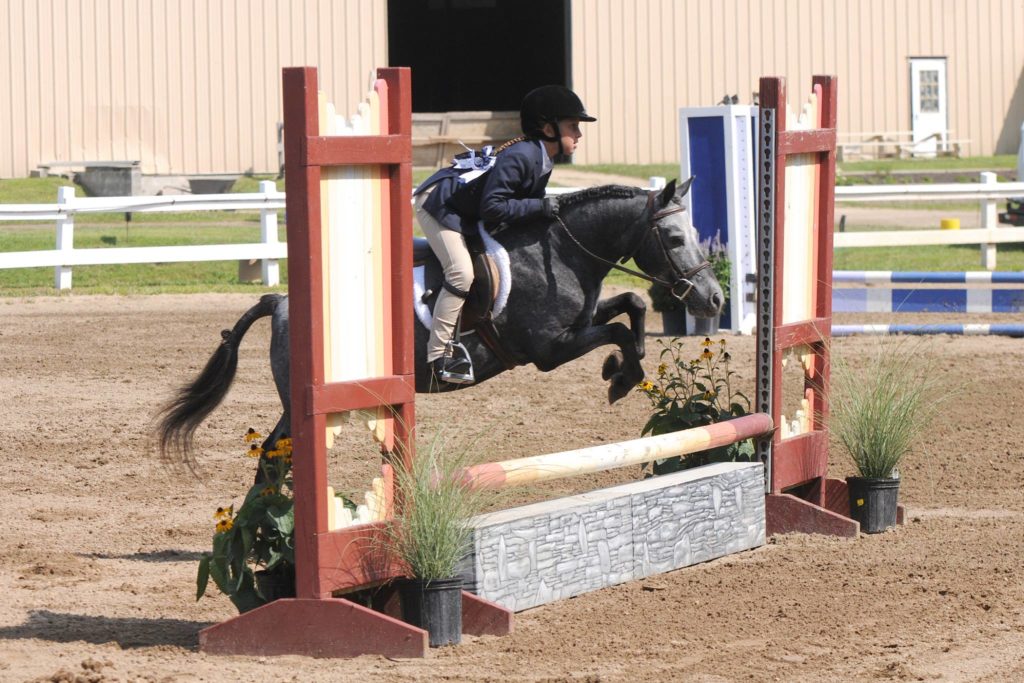 When it was time to think about showing, Aiva had the option of showing several horses or ponies in the barn, or to get a new one. She chose neither option. Instead, she chose one particular pony, one that seemed an unlikely choice.
A shaggy runt of a pony, Cosmo, lived outside and came with a bad rap.
A woman who did pony parties had him and became extremely frustrated with him because he pinned his ears, bit, and kicked, and would literally lie down on the job. Bringing him to Sue, she dropped him off and proclaimed, “He is yours, do what you want with him!” Cosmo was free; in fact the woman probably would have paid Sue to take him!
At the time, Aiva rode a pony named Jack. She saw what happened when other children attempted to ride Cosmo. He would bite them, stomp on their feet, and try to kick them. He appeared to hate children.
He terrorized the kids when they went into the pony paddock, Whenever Aiva went up to get Jack, she would see the other kids running away from Cosmo, worried that he might kick them. Aiva started petting the pony when she was in the paddock. Cosmo didn’t go after her; in fact he seemed delighted to see her.
One day Sue witnessed the two of them and decided to let Aiva ride Cosmo. She began by just having Aiva walk around. Cosmo was so good that Sue let Aiva trot him. That went just as well so she allowed them to canter. Although Cosmo tore around the ring as if he had just broken out of the starting gate, his ears were forward and he was obviously a happy pony. After the ride, he calmly let Aiva untack and groom him without so much as a backward flick of an ear.
From then on the formerly cantankerous pony would run to Aiva as she entered the pony paddock. He had found his person.
Aiva had been chosen, so she was determined to train this pony. She began to ride Cosmo every day. They would go for walks together, or she would join him in the field and just spend time hanging out with him. As they bonded their journey began.
Aiva began working with him at the tender age of five. Cosmo was only four. It took three years of determined, steady work before they would make it to the rated shows. Aiva read up on every training site she could find, and she received lessons every day from Sue.
When they began jumping, initially Cosmo sped around the fences cross-cantering the turns, missing the changes behind. Aiva worked on simple changes, but he would root and pull her out of her seat. In response, Aiva endlessly practiced transitions: canter to walk, canter to trot, trot to canter, walk to canter, trot to walk.
It wasn’t all ring work. Sometimes they would go on trail rides, or just continue to hang out together in the paddock.

To get the lead changes correctly, Sue taught Aiva about “the zone.” Just before a transition, you have the pony’s attention which Sue terms “the zone.” Can you keep them cantering, or do you want to trot? Sue would say “Bring him back to the zone.” And that is where they mastered the lead change. “Bring him back to the zone, add leg for the change behind first, then open the door by softening the opposite rein.” They got it! And they were ready to show. 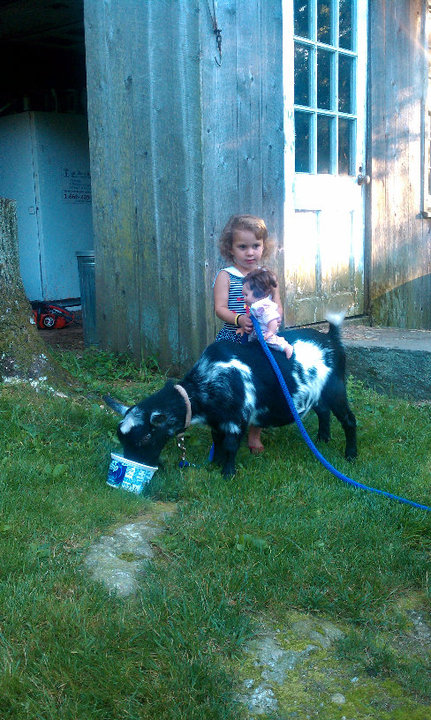 They began their first show year, 2016, in the walk/trot division and took third in the Connecticut Horse Shows Association finals in that division. Last year, when Aiva was eight and Cosmo was seven, they began the Short Stirrup division. They competed in both the Connecticut Hunter Jumper Association, and the CHSA, just for “the experience.”
Although Cosmo, at 11.3 hands high was not big enough to have experienced kids school him, Aiva didn't mind. She wanted him all to herself.
The 2017 CHSA finals, held at Westbrook Hunt Club, were Aiva’s first finals over fences. Aiva and Cosmo took first in the schooling 18" Short Stirrup Hunter, and second and reserve in the Short Stirrup hunter. Those results made it clear that Aiva and Cosmo were not there for “the experience,” they were there to win! And there was still the Hunter Derby to compete in.
The realization hit Sue and Yvonne: Aiva needed a shadbelly! The Hunter Derby is ridden in formal attire. Sue asked several other professionals at the show, but no one had a shadbelly that small on hand. Aiva needed a size 8 Youth.
Running to the on site tack store at Westbrook, Yvonne grabbed the girl behind the counter in a panic. “Is it a must for her to wear a shadbelly in the derby?” she asked. The girl answered, “Absolutely.”
They began combing the racks. The class was coming up fast.
And then…there it was. On the clearance rack, under bright spotlights, shone a size 8 Youth shadbelly…in pink and black…Aiva’s favorite colors. And it was 50% off! Yvonne put it on Aiva and it fit like a glove. Racing back to Cosmo, they put her up…just in time. She was on deck!
It was their first Hunter Derby and they came in second.
In the 2017 CHJA standings, Aiva and Cosmo took the Short Stirrup Year End High Point Award Championship and came in third in the CHJA Short Stirrup Hunter.

Aiva and Cosmopolitan finished the finals, and the year, in triumph. The tears in Sue’s eyes and the smile on Aiva's face during her victory gallop at the CHSA said it all. It wasn't just the win, it was Aiva's victory in reaching her goal. With Sue’s help and support, Aiva made her first pony at the age of eight. From a wooly recalcitrant pony to a willing show partner and star of his division, Cosmo transformed.

Life at the Barn 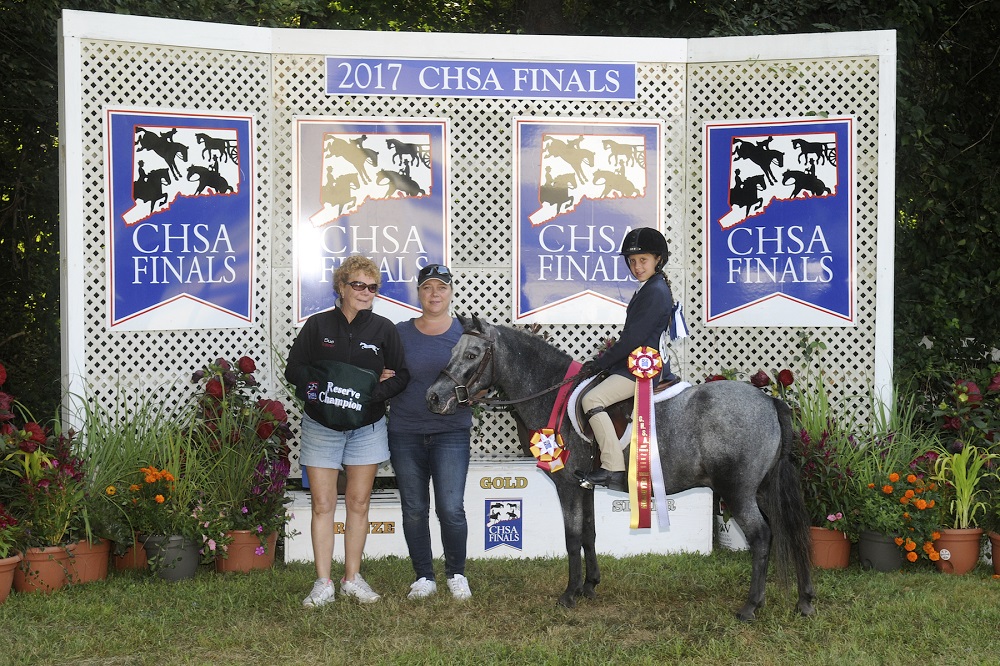 “We are so lucky and blessed,” says Yvonne. “Aiva rides three horses a day…at times five, and sometimes she just hangs out with the animals and kids. It’s truly the best life and it builds a great work ethic.”
She continues, “I have to fight with her to go to events or birthday parties, she never wants to leave the barn. No matter the weather or if she is sick, she is there.”

This year Aiva and Cosmo are moving on to the Children’s Hunter Pony division. AHorseinYourInbox will be sure to follow their continuing journey.