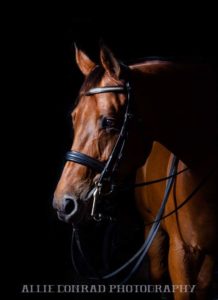 She didn’t want another horse; in fact she was trying to thin her herd. Carol Herron had just retired from her work as a scientist, and wanted to establish herself as a rider and trainer.

At the time, Carol had four horses. Her event horse, a Thoroughbred mare named Lee, had

developed a severe lung infection and needed a year off. Carol had bred her and got two nice foals; both were premium ISR/Oldenburg.

“I then leased her to a woman in North Carolina who wanted to breed my mare for an event horse. She loved the first foal she bred and decided to buy Lee.”

That was the idea. Thin the herd. However, that wasn’t quite how it panned out. It turned out the lessee was “horse rich–she had several broodmares and foals–and cash poor.” She asked Carol if she would trade Lee for one of her foals.

It was hardly what Carol had planned. She would still have four horses. But when she saw the photo of Lee’s two-month-old foal she was smitten. He had the cutest baby face.

There wasn’t much else that was good looking about him. Weaned early, he was a weedy little thing with a big pot belly and long spindly legs. But he endeared himself to her as soon as she went to pick him up. There were no baby antics; he climbed right on the trailer. Then he curled up and took a nap on the trip home  Carol says, “He’s a funny horse because he can be very opinionated about some things and laid back about others.”

The smart baby with the cutest face became “Cooper.”

Carol explains the name. “I had just watched Matthew Bourne’s Swan Lake starring Adam Cooper and I loved it.”. Dressage horses are often referred to as equine ballet dancers. The name was particularly apt.

Carol brought her new baby along slowly, and chose someone good with young horses to start him under saddle. Cooper made his opinions clear from the start. The trainer didn’t want to dismount by the gate, fearing that it would set a bad precedent. So when they were finished with the day’s session, she would ride him into the center, turn his haunches to the gate, and only then dismount.

Cooper promptly decided to play this game by his own rules. Stopping in the center and turning his haunches to the gate meant they were done with the session. To Cooper, that meant he was now in charge of when the sessions were over. Bolting from the rail to the middle, he would stop, and then turn his butt to the gate. Clearly, in Cooper’s world, the session was over.

Carol spent the first five years riding Cooper lightly, taking him out on trails from the time he was a baby. Trails were good for him both physically and mentally. As she worked with him, she learned that there were two sides to Cooper, the opinionated side, and the sweet side.

The sweet side was evident in the way he greeted her. He always came to her in the paddock, in fact he would race joyously up to the gate, sliding to a stop in front of her. Once he got there, of course he needed to be petted and told what a good boy he was.

The opinonated side… well, at five she brought him to Chris Hickey at Hilltop Stables to start his dressage training. “We both really enjoyed it. But Cooper could get stuck mentally. When things got difficult for him, he would just start to tune me out. He had opinions about what he would and would not do. He could be a challenge, he’s not a horse that anyone could get on and ride. When he got stuck he would rear…and he was 17 hands by then.”

Despite his sometimes contrary opinions, Carol always felt safe on him.

Carol had never competed above Second Level before, and never brought a horse along through the levels, but now she had a horse that showed tremendous talent. How far could they go?

One summer Cooper ripped “about a quarter of his hoof wall off. No one knew how he did it. It took nearly a year for the hoof to grow out completely.” Carol took care of him, carefully wrapping his foot each day for months. As she cared for him, their bond strengthened.

Chris Hickey left Hilltop; Carol and Cooper began training with Barbara Strawson, who had once been assistant trainer there.

Cooper had always been a hard working horse, but when they reached (what level where you at?) he slowed down. He felt lethargic. To give him extra energy, Carol began feeding him oats. It was the worst thing she could have done. Cooper came down with laminitis. Devastated, Carol spent endless hours with him, nursing him back to health. Her farrier, Bob Parbus, worked hard to help Cooper as well, and Carole credits him with helping Cooper get through it.

Yet when they returned to Maryland from Florida, Cooper foundered again, this time in all four feet. The laminitis was due to a vaccine reaction. Brent Zorn, Carol’s farrier in Maryland, and Dr. Peter Radue, her vet, helped pull him through again. Although he’s a big horse, “He’s a super sensitive, delicate flower,” says Carol.

After both founder episodes, Carol was “the one who soaked his feet in ice for hours, hand grazing him during his recoveries, turning him out each day in the small round pen, so he could get a little time outside…” Through these potentially life changing injuries and illnesses, Cooper’s confidence in Carol became stronger each time.

His rearing stopped too. “As he got stronger and developed more confidence that I won’t ask him to do something he just can’t do, he stopped rearing and now tries hard to do whatever I ask.”

They were fortunate. Cooper came back 100 percent sound. Carol and Cooper have continued their way up the levels. “I was going to be happy if he made it to Fourth Level, but we started competing at Intermediaire I. I wanted my bronze medal and I made it to silver.

Last year at I-1, Carol and Cooper scored a 68%.  Carol was thrilled. “It’s taken a long time to get here,” she declares. “We’re training passage and piaffe right now, he’s very good at passage; he enjoys it.” 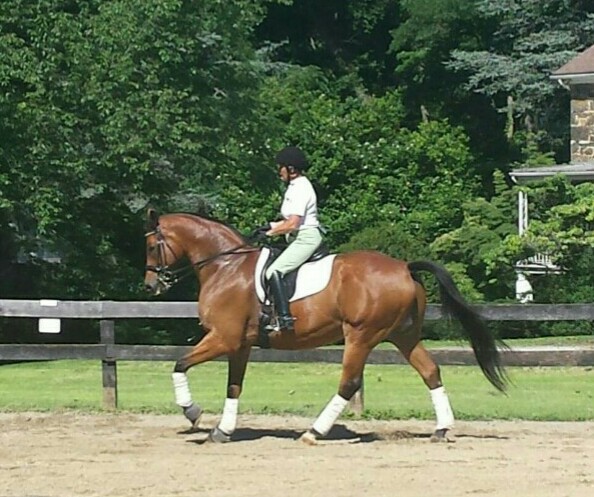 Piaffe, not so much. “I think the piaffe is just like all the other obstacles he faced, it’s physically difficult and requires him to really trust the rider. But he is working through it and getting better each day.”

Cooper has grown from the scrawny kid at the beach who gets sand kicked in his face to into the bodybuilder that no one messes with. “The harder the work he does, the fitter he gets. He doesn’t put up the resistance he used to put up.”

Carol didn’t expect Cooper; having another horse in her life was the opposite of what she had planned. But he charmed his way into her heart. And changed her life.

“It’s been a fun episode having him in my life…he came later. I’m 66 now. You think things will start to peter out and suddenly you get this horse who takes you where you never thought you’d go.”