No stranger to the winner’s circle, Liza Towell Boyd has won more than 25 USHJA International and National Hunter Derbies, earned Best Child Rider four times at the Washington International Horse Show, (a record that no one has touched), and three times won the Overall World Champion Hunter Rider as a junior. In addition she is the only rider to have won the WCHR Pony, Junior, and Professional titles. In 2017 Liza added to her titles by bringing home her second WCHR Professional title.
Liza doesn’t just dominate the hunter division. She has brought home the blue in Grand Prix show jumping as well.

What’s the secret to Liza’s astounding success, beyond her tremendous skill and competitive spirit? It’s all she says, “about establishing a relationship.” 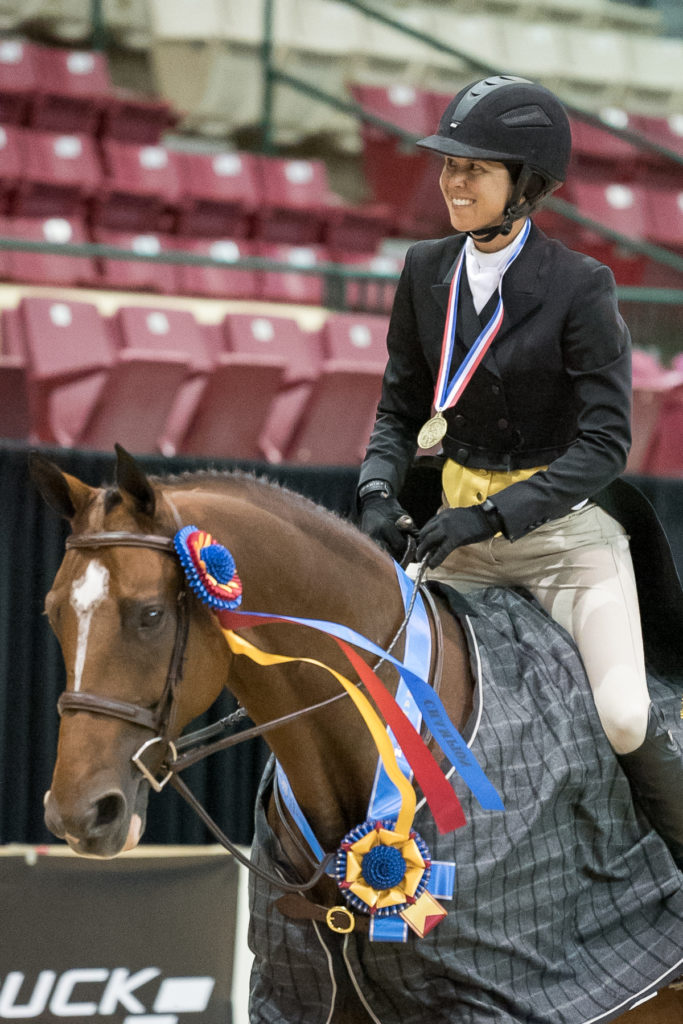 While Liza did a lot of catch riding as a junior, it has never been her favorite activity. She prefers to ride horses she knows and has a long-term relationship with. Riding and showing isn’t just about winning, it’s about the joy of forging a team with your horse. At home she “likes to live with a horse.” She spends time with them in the paddock, takes the horses out on trail rides, and makes an effort to get to know who they are. “In anything you do, horses will do better if they like you, they’ll try harder,” she says. “If I’m going on a trail ride in Wyoming with my husband, I have to get the horse to trust me and I have to trust him because he knows more than I do.”

Liza is based at her family’s Finally Farm in Camden, South Carolina, where she shares the training and riding duties with her father Jack and assistant Katie Wood.

For Finally Farm, the World Champion Hunter Rider Finals, held at the Capital Challenge in Upper Marlboro, Maryland, is always one of the year’s top goals. Held to showcase the top hunter riders across the country, the Finals are contested by the top 10 nationally ranked riders and top six regionally ranked riders in each division.

Riders qualify for the finals by earning points at member shows held across the country throughout the qualifying year. The WCHR classes are so important that riders plan all year for it. A lot of strategy is involved to qualify for the finals class: riders try to have the horses peak at the shows that feature WCHR classes, and plan the horse’s schedule around those shows.

The WCHR boasts a format unlike any other in the hunter world: three rounds, the first two classic hunter rounds on borrowed horses, and the third a handy round contested on horses that the riders currently show.

The borrowed horses are not ones the riders know; in fact if a horse in the competition is one they are familiar with, the organizers will remove it. The WCHR events are a great place to showcase a sales horse, so the borrowed mounts often are sales horses for the equitation or jumper ranks. They are not judged as hunters; it is the riders who are being judged on their ability to best show off a hunter.

The only opportunity the riders have to get to know the horses they will ride is to flat the first horse they will ride, and watch the other one being ridden in the schooling area. For that second ride, they have to enter the ring cold.
“The class is so unique,” says Liza. “You’re in a class like that with five other amazing riders who are used to riding under pressure. It gets to be the luck of the draw. And everyone brings their best handy horse.”

Although at the WCHR there is precious little time for Liza to follow her preferred route of bonding with a horse, she came up with a strategy. “I tried to get to know the horses as much as I could in that little amount of time. That was my plan, to develop that trust.”

She spoke to the grooms of both of her borrowed horses, found out their names and a little about them. She spent time petting them, and talking to them. In the first round she rode Chevito, an eight-year-old Holsteiner owned by North Shore Farm.
“My horse was a bit nervous, so I tried to get to know him as much as I could in that little amount of time. I spent extra time on the flat with him, getting him to drop down a bit and relax, getting him to trust my hand, bond with him, relax him.” Liza scored an average of 90 in the first round to move into the second round.

The second horse, Redfield Farm’s Carolino, had been ridden by Scott Stewart initially. Because Carolino seemed a little nervous under the pressure of the competition, Liza had Liz Fogelman, who works for her, feed him ice cubes “to help him relax a little. We scratched his nose, petted him, he chomped on the ice cubes. It was a good distraction from all the pressure.” They both took deep breaths to help him relax as well. Her average score of 90.5 in that round was in part due to her efforts to relax Carolino, and moved her to the top, where she stayed.

That year’s Pro Finals was one of the most hotly contested in recent history, with the first and second rounds just fractions apart. Aboard their own mounts in the handy round, the riders would have to pull out all the stops.
The handy course was extremely technical, even containing a bounce! Although Liza wanted to be conservative, Jack wasn’t having it. “You can’t,” he said.

Liza explains, “Everyone brought their best horses so it made it exciting to watch. Great riders on great horses. We had to go for it in the handy. Tori Colvin really put the pressure on us going first and doing these really, really hard turns. You couldn’t be conservative; you had to go for it. Just take a deep breath and go.”

Liza was on a horse she knew well and trusted. She and O’Ryan had walked through Central Park together and competed under the lights in the city (on their way to a win in the $50,000 Duchossis Cup at the Rolex Central Park Horse Show). Because of their strong connection, she had the confidence in him to go all out for the win.

And go for it they did, with spectacular turns, precision, boldness, and smooth and precise transitions. Liza and O’Ryan won with 275 points over Hunt Tosh (272.16) and Scott Stewart (270.49).

Liza’s strong bond with O’Ryan, and the time she spent time establishing a connection with her two borrowed mounts, could very well have provided the edge that clinched her win in this highly competitive event. Whether it’s a horse you’ve shown for years, or a mount you will be on for two minutes, that connection can make all the difference. As she says, “It’s all about knowing your horse.”