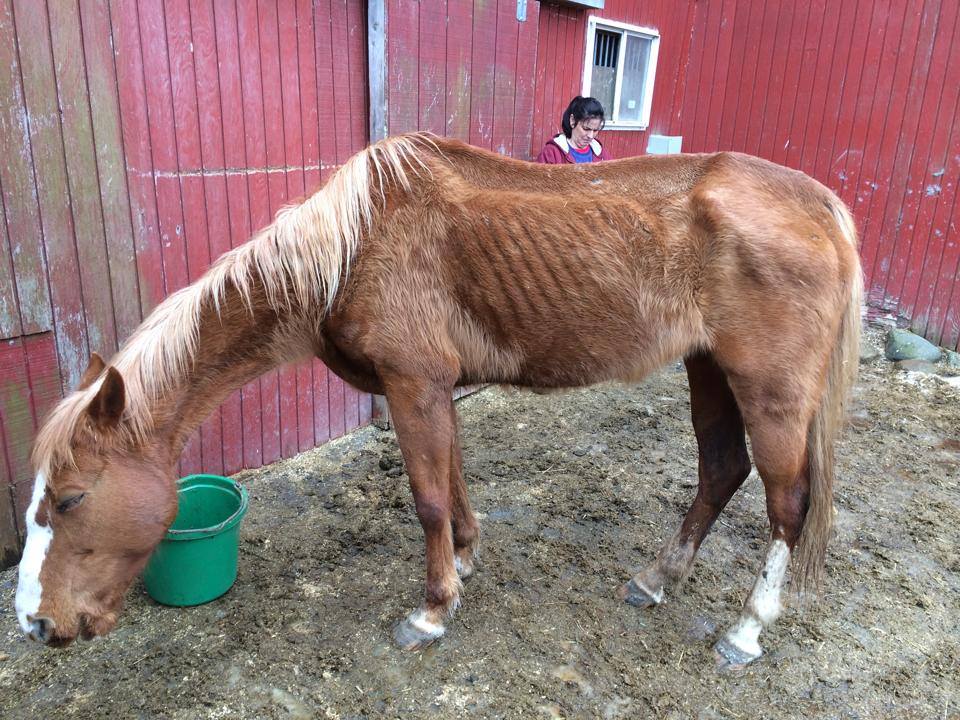 When she hears Judy’s truck approaching the barn, Mirage runs to the gate, waiting for “mom” to come and get her. The stunning chestnut mare enjoys her life in a verdant pasture, and trail rides and hunter paces with Judy.

Two years ago, Mirage was less than 24 hours away from death. Lynda Roemer of Equine Rescue, located in Bloomberg, New York, had been alerted to a severe abuse situation and, garnering the support of local law enforcement, had gone in to save the horses. Five horses, whom Lynda called the Hamptonberg Five, were teetering on the verge of death. In fact, if Lynda didn’t seize them immediately, they wouldn’t make it until morning.

Lynda wasted no time. The horses were brought to Equine Rescue, where temperatures were taken and blood was drawn. The horses’ temperatures registered at 94 degrees: far below a horse’s normal temperature of 100.2. Their bloodwork was off the charts, in fact Mirage’s was the worst Lynda had ever seen. Her organs were shutting down, and she was covered in infected cuts and wounds. Lynda didn’t think Mirage would survive.

But Mirage was a chestnut mare, after all, and she lived up to their reputation. She was opinionated and saucy, and she was going to prove Lynda wrong.

Lynda nursed her along slowly, treating her wounds and infections and feeding her a pound of soaked Senior feed and hay five times a day, increasing the amounts gradually as she decreased the frequency. In 60 days Mirage was fat and shiny.

When members of Equine Rescue’s team began riding her, she was speedy, and not always particularly accommodating. Lynda had been told that Mirage had been a barrel horse, and her need for speed made that easy to believe.

Judy has owned horses for 50 years, and she isn’t much interested in geldings, or bays. She does chestnut mares, and that’s that.

Her horse, Sunrise, (a chestnut off-the-track Thoroughbred mare) had turned 26, and was no longer able to jump and to do the hunter paces and trail rides that Judy loves. So Judy needed another horse. Initially she planned to ride her daughter Emily’s horse, Just A Mirage, (Bliss) a flashy…chestnut mare. Emily wanted to jump higher than Bliss could jump, so the plan was for her to be part Judy’s horse, part school horse for Michelle Clopp, the owner of MLC Farm where Judy boards.

Sadly, Bliss stepped on a carpenter’s nail and developed osteomyelitis. Although the family spent a fortune trying to save her, they couldn’t quell the infection and Bliss was in constant pain. Heartbreakingly, they had to put Bliss down.

In order to have a horse to ride, Judy leased one.  But he was a bay…gelding.

At a show at MLC a year to the day after Bliss was put down, Equine Rescue set up a booth, with posters of their horses available for adoption set at either end of the booth . One of the photos on the poster board was of Mirage. Michelle mentioned that Judy might want to take a look at the cute chestnut on the poster.

Immediately the name jumped out at her. Mirage! On the day that Emily’s “Just A Mirage” (Bliss) had been put down a year ago Judy was looking at a photo of a horse who was available to adopt. And a mare! A chestnut mare by the name of Mirage. This was no accident. Judy knew she had to have her.

Two weeks later Judy was at Equine Rescue. Just one look at the shimmering red gold mare embellished with plenty of non-stop chrome confirmed it.  “I want her,” Judy told Lynda. Completing the paperwork, she called Michelle. “She’s coming home,” was her message.

Michelle, meanwhile, was out shopping with her mother, Sandy. Just as she hung up with Judy, a truck went by. On its side, in large letters, was the world “Bliss.”

Judy spent two hours loading Mirage to bring her home. When they arrived at MLC, Michelle told her about the truck she’d seen. Judy got the message. Emily’s Bliss had sent her her own “bliss”.

Judy and Mirage have been together two years now, hunter pacing, exploring the endless trails in Millbrook, New York, and developing a bond unlike any Judy has experienced in her five decades of horse ownership. Judy is a widow whose children have flown the nest. But she has Mirage in her life, and that’s all that matters.

When asked what the two of them plan for the future Judy responded, “living happily ever after.”