Not Something You See Everyday By Robert Goodman

Purim is the Jewish holiday described in the biblical Book of Esther. The story celebrates the Jewish victory over their Babylonian enemies, especially the death of the wicked Haman, royal vizier to King Ahasuerus, through the miraculous efforts of Queen Esther, her older cousin Mordechai who raised her, and the “hidden face of God.”

Each March since 2006, in an effort to make the Purim story come alive, Rabbi Shmuel Herzfeld of Ohev Sholom, “The National Synagogue,” in Washington, D.C., has reenacted the Purim story on the city streets. This fun and festive day is growing by leaps and bounds every year, as Mordechai dressed in King Ahasuerus’ royal robes is led on a horse by the wicked Haman to the delight of children who gain a better understanding of the biblical story.

The parade route is along the very cosmopolitan Connecticut Avenue to K Street NW, famed for its lobbyists and lawyers. There is a police escort followed by a small klezmer band leading the parade in front of Haman leading Mordechai on the horse. Trailing the parade are jugglers, a stilt walker, a unicycle rider, and dozens of parade goers dressed in festive costumes spinning “groggers” (noise makers). Hamentashen, a triangle-shaped cookie usually wrapped around a fruit or chocolate filling, are given to the many parade watchers. It’s all quite a sight to see, especially for the non-Jewish onlookers who are unfamiliar with the Purim story. 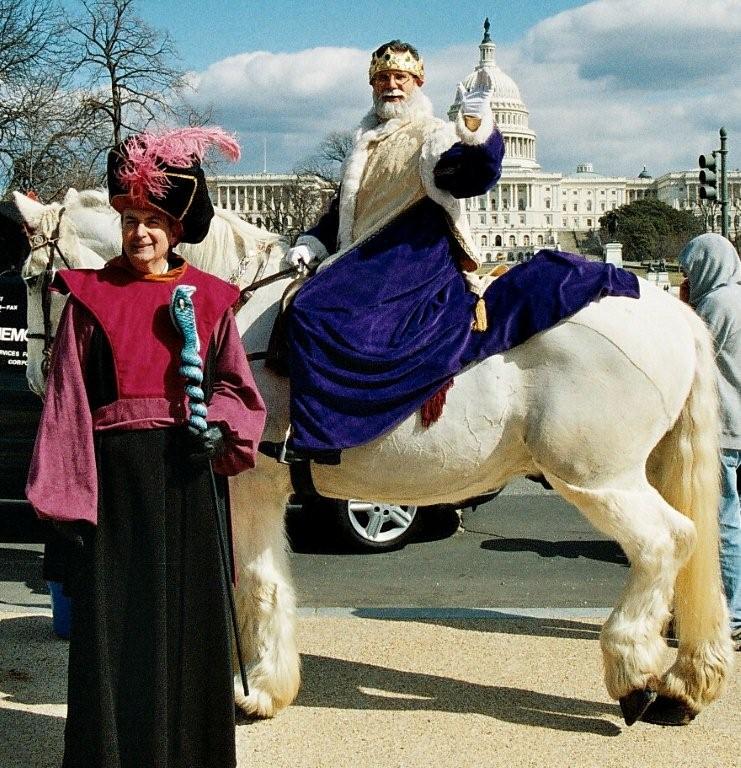 Ohev Sholom’s second Purim parade was scheduled, permits acquired, and the day was fast approaching. I had ridden as “Mordechai” the previous (first) year, and Rabbi Herzfeld asked me to ride again this year. He knew that I had been riding for many years and would feel comfortable enough to ride a horse safely in the middle of the very busy traffic. I was asked to find a new horse for this second parade, a white horse if possible as that would look more regal. I asked a friend for help and was led to Rick Jones and Marcia Brody, owners of Carriages of the Capital, and their friendly white Percheron-cross carriage horse named Blizzard. Blizzard’s other job is leading South Asian grooms in for their traditional weddings.

Sunday, March 4th, 2007, started out as a chilly and windy day. The parade route this year went from near the White House to the United States Capitol Building, nearly one and a half miles from 15th Street NW to 3rd Street NW along Pennsylvania Avenue. Due to the cold weather there were hardly any parade watchers along the route. The parade was fun, loud, and well attended by at least 60 costumed adults and children from Ohev Sholom. Everyone stopped to take photographs with Blizzard and Mordechai at the end of the parade. There was one group picture taken with the U.S. Capitol in the background, a very historic picture. All the parade goers cleared the area within five minutes of the end of the parade. The only ones who remained were Marcia, Blizzard, a friend of mine, and me.

The sun had come out and it took the nip out of the cold air. I suggested to Marcia that we walk Blizzard to his trailer and we to our vehicles on the pea gravel walkway of the National Mall so that we did not have to contend with the passing cars on Pennsylvania Avenue. No sooner had we taken our first steps when a red, white, and blue Washington, D.C. Metropolitan Police car speedily drove up from behind us with lights flashing, siren blaring, and a voice coming from within the police car telling us to immediately stop where we were and present our identifications.

There we were, three humans and one gigantic white horse, all dressed in unusual costumes. I was wearing a long white beard, a golden jeweled crown, and carrying just as regally as I could the train of my long purple robe in my right hand and a bucket of horse manure in my left. Marcia was wearing her English riding habit. Blizzard was dressed in his colorful beaded South Asian wedding neck collar with matching headdress and jingling sleigh bells around his neck. My friend was carrying a short-handled shovel. 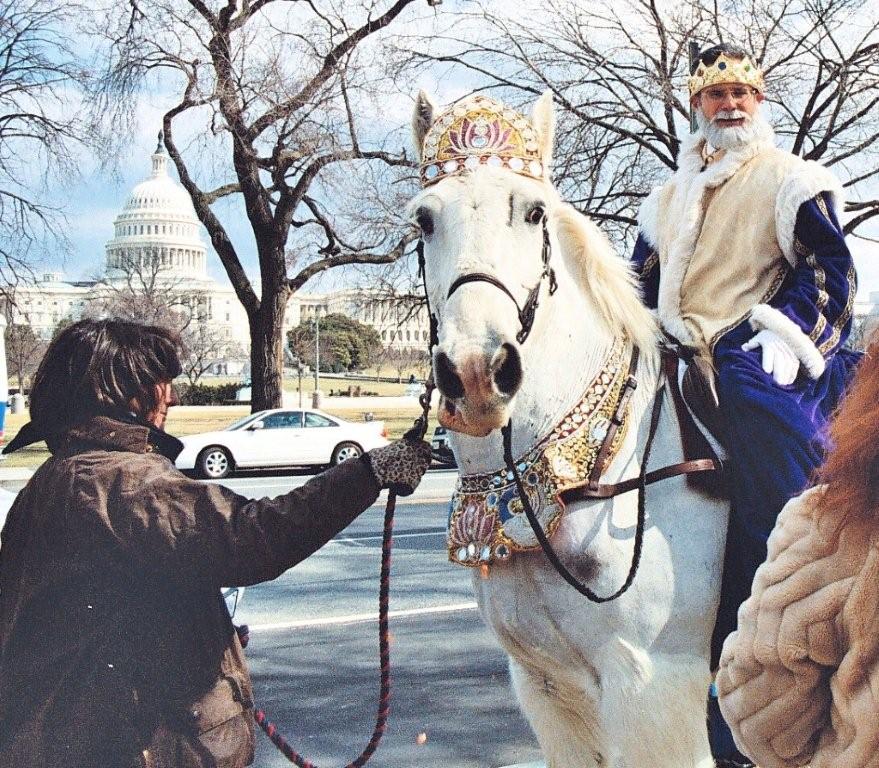 Out from the police car stepped a very short police officer that did not look the least bit happy to see us. “Please show me your ID’s,” he said rather sternly and officially. We looked at each other and said as politely as we could to the police officer that we had left our identification in our respective vehicles. Who knew we’d need them? We explained to the police officer that we had just finished our Purim parade, that we were walking the horse and ourselves back to our respective vehicles, and that we felt it would be a much nicer walk back on the National Mall. The police officer then said with little compassion or care for our comfort, “You’ll have to get off the Mall.” I respectfully asked the police officer why we had to leave the Mall. He explained that all private horses were banned from the National Mall as a means to prevent the spread of possible infection to the National Park Services’ Park Police horses. As Marcia and I were familiar with extremely infectious equine diseases, we immediately understood and told the police officer we would get off the National Mall … just as quickly as we could. Thankfully, we were not fined nor arrested, but these thoughts did pass through our minds. This would have been a most unfitting ending to a joyous Purim celebration. (I later learned from a National Park Police mounted officer that the only reason we would have been required to leave the National Mall grounds was if we did not have the correct parade permit papers to walk a horse on the National Mall grounds. Since I did not personally possess the parade permits on me, it was a moot point. We left the Mall immediately.)

As we proceeded to 4th Street, the next cross street along the National Mall, I turned to the police officer to ask one last question. “How did you know we were on the Mall?” Without skipping a beat, the police officer responded, “We received a dispatch that there was a ‘king walking a white horse on the Mall.’”

We could not stop laughing at this remark. We imagined what the dispatcher must have heard, and imagined that the dispatcher must have asked the caller to repeat the message when the call came in from the busybody with a cell phone who felt the need to report our apparent violation of the law. “That’s right, ‘A king walking a white horse on the Mall.’” After all, it’s not something you see everyday.