At Devon two years ago, Andre Dignelli felt someone tapping him on the shoulder. It was Taylor St. Jacques. “It’s my dream to ride at Heritage,” Taylor told him. Her mother chimed in, “I’ll do anything I can to make that happen.”

At six, Taylor had seen Andre in Horse Power on Animal Planet. At that tender age, she knew exactly what she wanted. “I’m a very competitive person, and I like to ride with the best. I want to be at the top of the sport and you have to be with the best to get there.” 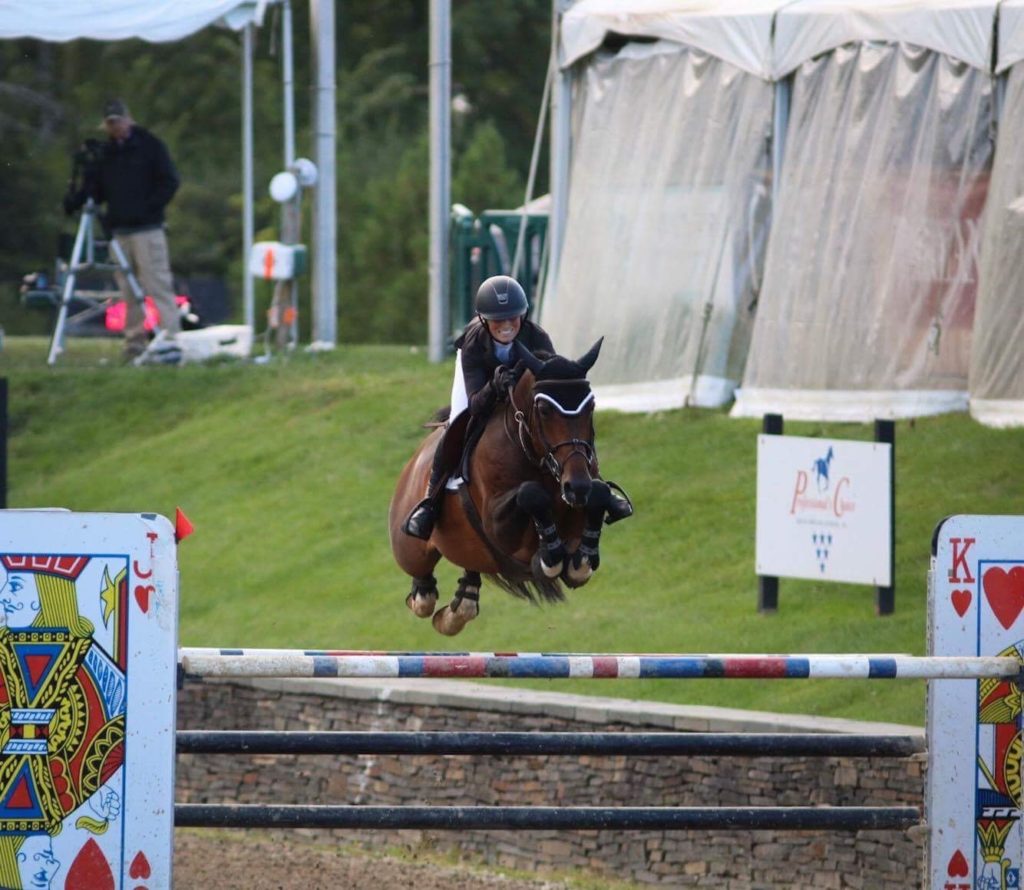 After Devon Taylor started as a working student, Taylor and quickly proved her grit. “The desire and the work ethic were there,” says Andre. Then, her step-Dad stepped up to the plate. To say Taylor has been on a roll since then would be a serious understatement.
With top horses to match her talent, in 2016 Taylor was the only rider to ribbon at every National (hunter/jumper) equitation finals. In 2017 she was named the Show Jumping Hall of Fame rider of the month for January for her finishes in classes held at WEF, and took the championship for the small junior hunters with Rose Hill Farm’s astounding William Hill.
She won the $5000 Equitation Challenge at Old Salem Farms riding Heritage Farm’s Charisma. Taylor made a statement at The Devon Horse Show, winning every class from the first to the last, and every “Best of” trophy along the way. Andre says, “I’ve been doing this a long time. I’ve helped a lot of top kids and pairings but this is the first time I’ve ever had a student win every class that they entered.”
He says that Taylor is “a great example of what Heritage’s program can produce. Besides her horses she shows a little green pony, and helped set up at Fairfield. We’re excited about buying a Grand Prix prospect for her.” Taylor is a natural. She mastered posting in her first lesson, exhibiting her natural feel, and passion for horses. Yet she goes beyond. “She really, really tries to win the class,” says Andre, “that’s something you can’t teach.”

While the equitation and hunters are fun and obviously Taylor does extraordinarily well in those divisions, it’s the jumpers that really capture her heart. Competing in the high juniors (with fences set at 4’7” to 4’9”), Taylor says, “there’s not as much pressure when you go in the ring, it’s more about having fun. You can make a minor mistake and still win. You don’t need to be perfect.”
Her horses “have grown to be my best friends. I really care about and love them. I form a strong bond, and I think that helps you; they try harder for you.”
But everyone has one special horse, and for Taylor that horse is Oliver (Qantar Des Etisses).
Taylor had always wanted a junior jumper, and at the end of the Winter Equestrian Festival in Wellington, Florida in 2016, it was time to get one. In discussions with Andre and her parents, they came to the realization that the budget would not allow for the perfect horse. Compromises would have to be made; certain issues, perhaps soundness, perhaps age, would have to be dealt with.
But Taylor was in a rush; she wanted one now! No matter which horse she tried, she would think, “I can deal with this; I can make it work.”
“Calm down,” Andre advised. 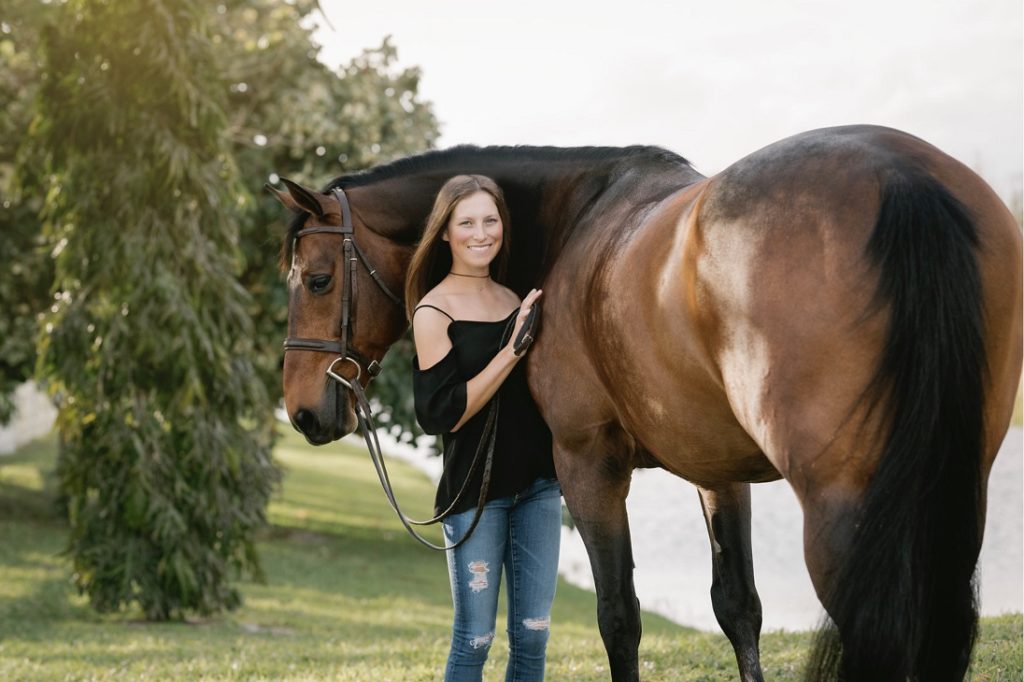 Then McLain Ward sent them a horse to try. Researching the horse’s background Taylor discovered that he was a stallion, and had won the Grand Prix in Paris. She was thrilled! She’d always wanted a stallion.
But when she went to the barn to try him, he was no longer a stallion. McLain had had him gelded. Disappointed, Taylor nevertheless got on to try him.
He was “phenomenal, a match made in heaven! Amazing on the flat, soft and quiet, and easy over the jumps.” And he wasn’t hot like a lot of the previous horses she’d tried.
Taking him for a trial to HITS III, Taylor did a smaller course on him than what she would compete in in the High Juniors. “Jumping him was a rush!” she exclaims. But since it was her first time riding a real course on him, Taylor goofed, doing seven and a half strides in an eight stride line.
Oliver didn’t care, proving “he could take a joke,” says Taylor.
The next day they did the highs together. It was all Taylor had dreamed of. “I fell absolutely in love with him,” she explains. And Oliver became her long dreamed of junior jumper.

At HITS IV, however, Oliver was a different horse. Taylor was worried. “In the schooling ring, I had to kick him; I was thinking we’re not going to make it over the jumps when we go into the ring.”
Apparently, Oliver knew what he was doing. Why waste energy in the schooling ring when that didn’t count? In the show ring, he turned it on. “He was a little firecracker, hunting the fences, a completely different horse.”
They won the Junior Jumper Classic at the show.

When Taylor had tried Oliver, Team Heritage had been told he “wasn’t for everybody.” Now they knew why. They’d known they were going to have to compromise in order to find an affordable junior jumper, and they had just discovered the “hole” in Oliver that they would have to deal with for he and Taylor to be successful.
Oliver needed to be handled very diplomatically when schooling. While very quiet in the schooling ring and at home, he was fiery in the show ring. Taylor felt like she needed to jazz him up while schooling, yet it was the exact opposite of what she needed to do.
Instead, she needed to let him be “a little dead and just plop over a couple of jumps. He’s not a horse that likes to be schooled before going into the ring.”
Taylor adds, “It was strange to me at first and definitely took some getting used to. Usually the schooling ring is where I am able to school a horse up before going in the ring, but with Oliver, we keep it very simple, don’t jump too high, and just keep him happy. The happier he is, the better results you get.”
Taylor puts it this way, “It’s Oliver’s world, and we just live in it.”

It took Taylor a little while to adjust, to learn to ride what was, essentially, two different horses. “I made a lot of mistakes!” she admits. Her first time showing him at the Washington International Horse Show, “we did two strides in the one stride” (a massive mistake). Taylor pulled him out of the second jump to avoid a crash, and “I nearly fell off. I was so embarrassed!” Oliver, very confused at the last minute change in direction, nevertheless carried on, never getting mad or scared because of it.
By the time they were back at Wellington’s Winter Equestrian Festival for the winter, Taylor proved she had finally mastered the art of riding a bi-polar horse. “We had such a good season, getting a first, second and third in the Classic during WEF.”

She and Oliver competed in the FEI North American Junior and Young Riders Championships where top juniors compete in Show Jumping, Dressage and Eventing.
In the Individual Speed, “Oliver was amazing. He covered my butt; he jumped out of his skin! We ended up Fourth Individually. We did five rounds in three days; that was a lot to do in that amount of time.”
In September, they competed in the $250,000 Black Barn Jr/AO Jumper Prix at HITS. Oliver was the only horse to jump 3 clear rounds, winning the class.

Oliver has helped Taylor reach all of the goals she dreamed of in the junior jumpers. “He qualified for every indoor, Devon, and the Young Riders, as well as giving me the opportunity to experience my first Grand Prix. We put in two clear rounds to end up third. He honestly is all I could dream of and more.” Along the way they’ve formed an amazing bond. “He’s my everything. I always wanted a jumper, so when I got him my world was complete. He’s my pride and soul. He’s taught me more than every other horse I’ve ridden, has taught me the ropes in the jumper ring, how to flat properly...He’s very forgiving of mistakes. He knew I didn’t know what I was doing so he helped me. I love him to pieces. He’s more than we ever thought he could be; he’s impressed us all.”
His personality is as endearing as his talent. “He’s very goofy, he does the weirdest things. He’s very jealous if I give other horses attention; he thinks he owns me.”
It sounds like Oliver is right.