Then he met a horse.

He never discussed his thoughts, or his memories, with his wife and daughter. “I didn’t talk about it; I wasn’t dealing with it very well, not expressing it as I should,” he says. Yet having a family kept him from acting on his suicidal thoughts.

Art had spent almost 12 years in the army. He says, “It was pretty common among veterans, you turn in your uniform, you turn in your duties and responsibilities. How can you replace everything you’ve done, and been through? I was feeling pretty lost. I knew I had to look for help.”

Seeking help, Art searched Google. “In my search for answers I began to look for different types of therapies available that wouldn’t put me in a doctor’s office chair simply regurgitating my story only to have that doctor not know what to do with the info besides feed medication at me. I had tried that and it obviously didn’t work for me. One search led to another in a rabbit-hole style of search and then I stumbled onto equine therapy. As I began to read more into it I read about a group of people (military officials) that had been invited to Saratoga so they could see what they were offering to the active and veteran military community. Their findings were out of this world!” 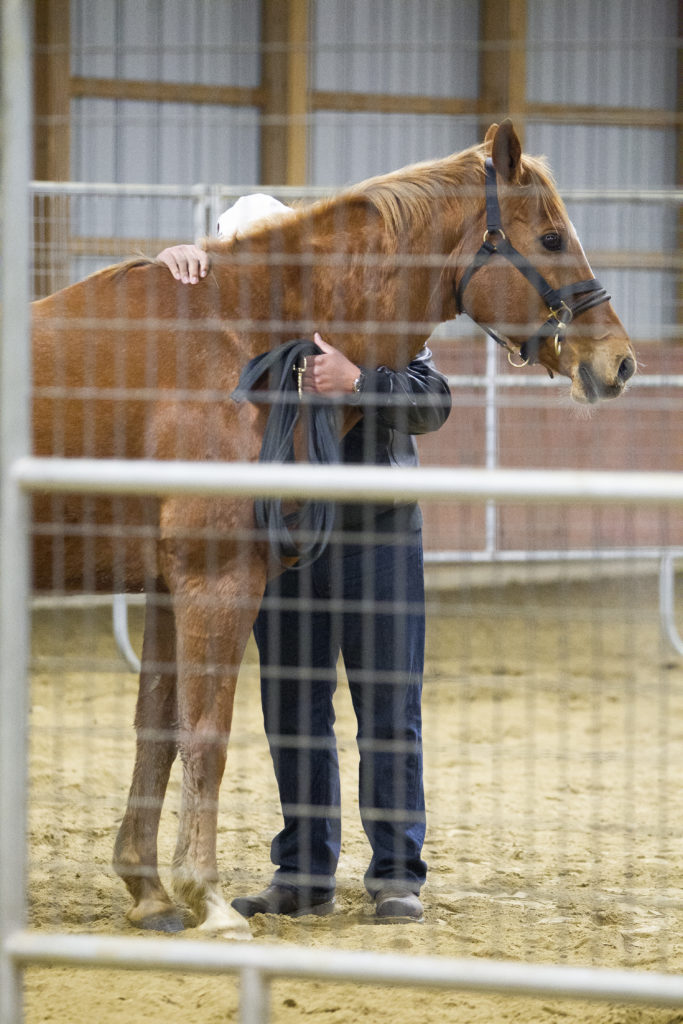 That research led Art to the Saratoga WarHorse website. “I learned what they were offering and I found it a little hard to believe. However, I spoke with my wife Diana about it and she agreed that I should try it. After all it was offered free of charge. ‘Nothing to lose,’ I figured.”

Saratoga WarHorse offers veterans a three-day “Connection Process” that has proven to be effective and invaluable for those struggling to adjust to life after military service. Using off-the-track Thoroughbreds produces a win-win, giving the horses the opportunity for a rewarding career when they have retired from the track while the veterans interacting with them receive a life changing experience.

The organization has two locations: its main site in Saratoga, as well as a satellite location in Aiken, South Carolina.

Program founder and director Bob Nevins walked Art through the whole process. Art was “very skeptical. Really, a day with the horses will affect me that much?

“No more than two days had passed when I got a call from Janelle Schmidt asking me if I was still interested in attending their program, to which I enthusiastically answered yes! By this time, I had already spoken to my friends Aaron, Stephen, and Maribel, all veterans themselves and considered my family, about the program and they were all interested in attending with me. Everything was arranged and we were up there within only a few days, maybe a week.

“I was expecting to just go there, meet with the horses and come home with nothing.

“Instead I came home a different person.”

Art’s first deployment in Iraq was also his first combat experience. It was April 4th, 2004, and the 2nd Battalion 5th Cavalry had just been stationed in Sadr City, Iraq.

Informed that not much activity was happening in the area, and that the last ambush had happened in mid 2003, the new arrivals were not expecting an attack. Because of this, “Leadership figured we would deploy ‘light’. We didn’t have any heavy armor tracked vehicles, instead riding around in Humvees and supply trucks with no doors, roofs, or protection,” Art explains.

That morning, Art was told that he “would be on guard duty (base defense) during the night shift from 6 p.m. to 6 a.m. At 5:30, as we were doing our inspections, we began to hear machine-gun fire and what sounded like rockets followed by a boom! Rocket Propelled Grenades. We didn’t really pay too much attention as the towers around us were not shooting and nothing was coming over the radios so we kept right on with our inspections. Then a soldier ran over and told us to hold in formation and that nobody in the towers was getting relieved just yet. Something was happening and I didn’t know what it was. I started to get nervous.

“Then we got word of a platoon that was fighting for their lives; and indeed, one life had already been lost.

“The NCO (non-commissioned officer) told us that they were assembling a rescue convoy to go out and retrieve the platoon now and we would be going out with them. This is what we trained for, I figure. This is what being a Soldier is about. Our brothers. I silently pray to myself and shut out the noise while I compose myself. ‘I’m ready’ I say to myself.

“We get the word that they have taken more casualties now, and that the first rescue attempt has failed, also resulting in more casualties. This was really happening. Combat isn’t just something I saw on TV anymore. It’s something I am about to experience. Will I live through it?

“As we were making our way closer into the city, I could smell more of the smoke, burning tires and vehicles that the Mahdi army had used as a blockade. Then, all of a sudden, I start to hear it. Bullets whizzing over our heads! They are really shooting at us! In the distance I could see hundreds of people waving green flags and AK-47s in the air. And then I noticed bright flashes of light. Clack Clack Clack! I hear the rounds hitting the buildings behind us.

“When we got to the casualty pick-up site, we drove into the middle of a circle made up of the humvees and Bradley Fighting Vehicles established in a defensive perimeter so we could dismount and wait for the rescue convoy to come back with the wounded in order to transfer them to our trucks to take them back to camp for treatment. What seemed like an hour for them to get to us was only about ten minutes. The wounded guys poured out of the trucks, limping, hopping, running.

“We ran up to the vehicles to help open doors for the wounded that couldn’t do it themselves. The shock of seeing my brothers bleeding out, screaming and moaning in pain, and some of them frozen in shock was overwhelming..

“I opened the back door to one of them; he was already dead. I just caressed his face and pulled him towards me, grabbing him by the arm to extract him from the truck. I could smell the metallic scent of the blood. I still do to this day. His blood, along with the blood of others I helped was now on my vest, uniform, hands. I still feel the blood on my hands, too. I just gently placed him on the bed and the other guys pulled him the rest of the way. No time to cry. No time to feel. Not in the middle of a firefight.

“It was about 7:30 pm when the failed rescue convoy returned. They looked as if they had just fought Satan’s army; all tires on the humvees were shot up, windows broken, blood streaked on the doors or dripping from inside. We all ran towards them to help them out. I took Specialist Hiller in my arms and carried him to the building. He begged me to not leave him, to not let him die. I promised him he would be taken care of and be okay. That promise was broken a few hours later; he died on the way to the hospital.”

Art was now a combat veteran, a title he wears proudly. But the emotional and psychic toll of that combat would haunt him for over a decade.

At Saratoga WarHorse, the veterans were given a briefing by Melody Squier, Lead Instructor, to learn how to interact with horses. After that they began working with them. Each was paired with a horse; Kip was chosen for Art, or rather Kip chose Art. “From the moment I met him,” relates Art, “we kind of locked eyes.”

Bob, watching the interaction, told Art, “Ok, this is going to be your horse. Go ahead and take care of him.”

“Once he started communicating with me,” remembers Art, “the entire world just disappeared. It was just me and him; he bowed his head, and said that he trusted me. I thought, ‘Wow, we’re really communicating.’ He gave me that connection.”

Saratoga WarHorse had taught the veterans how to pick up on the signals the horse was giving them. “When he lowers his head, he’s listening to you, asking what do you want me to do? We taught them to come to us, to change directions, and we learned to be safe,” explains Art.

“They taught me to trust the horse, in essence teaching me to trust in the feelings I get from my experiences. They also taught me to control the horse, showing me that no matter how big and powerful the beast may seem to me, I am ultimately the one in control of it. It teaches you how to tame whatever it is that is keeping you down. It physically put me in the ring to face and fight the ultimate battle that I had been struggling with while the people that I love and respect were outside looking in, proving to me that there are people that not only understand what I’ve been through, but have also faced the same battle. 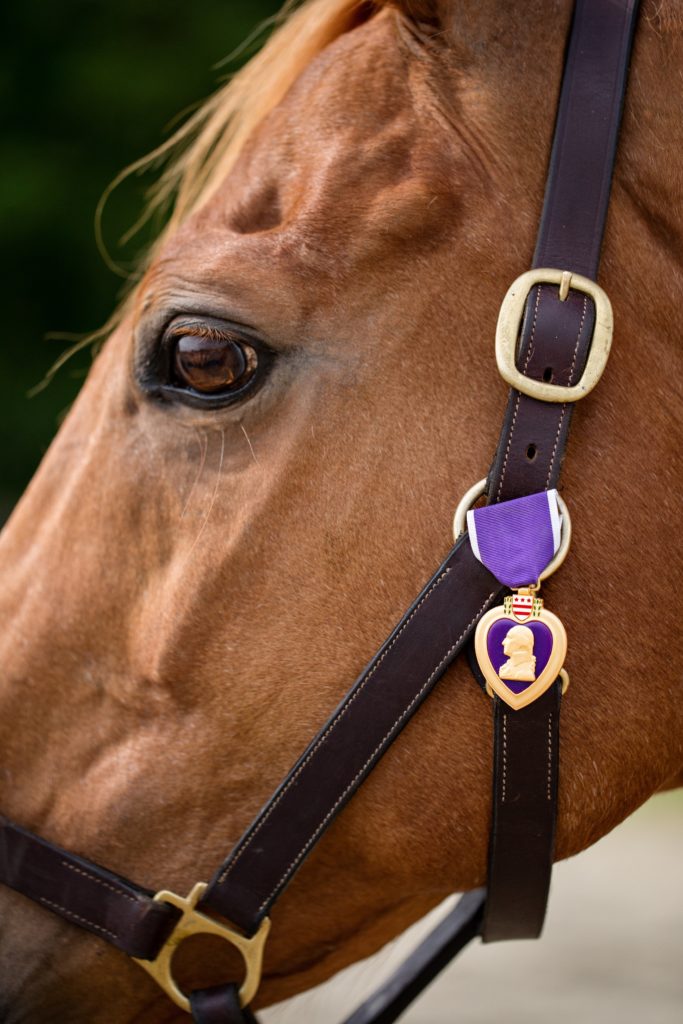 “Leaving that corral while the horse trailed me allowed me to realize that I am the one that decides where we both go. I can’t get rid of the horse, but damn it if I can’t lead it.”

During the experience, Art was “pretty much on my tippy toes. What is he going to do? Is he going to just charge me and trample me? I’m looking straight into his eye, he gives me a little wink, like don’t worry about it, we’re a team, we’re going to come out on top. He took me from fear to serenity.

“We synced our breathing; I just put my arms around him. I hugged him. I felt that relief, he was just drawing it out of me, that relief that I had needed for a long, long, time. He wrapped his whole head and neck around my shoulder, protecting me from everything, removing all that fear and anger out of me. At that moment of my weakest he was protecting me.”

Since his experience with Kip, Art feels “more empowered to talk about my experiences; I feel more accountable to my family. They should know what’s going on with me. They don’t have to trip over a land mine.”

Art’s family knows now when to engage with him, and when he needs space.

“My wife thought it was her causing the problems. I thought I was protecting her by not sharing. Our communication has been so much better since then. It’s improved my marriage so much!

“And now my extended family understands, too. It is a huge, huge change, to go from being in the darkness by myself to being part of my family.”

Art is now studying to be a social worker, so he “can bring my experience to help some other veterans, so they don’t use a knife or a gun” to take their lives.          Kip turned Art’s life around, and Art struggled for a time to figure out a way to express his tremendous gratitude for the horse, and the program.

During his tour in Iraq, Art had received the Purple Heart for injuries received in combat. Kip, and Saratoga Warhorse, removed the pain that Art had suffered with for so long due to his experiences in that war. Because of what they did, Art felt that they deserved the Purple Heart more than he did. “They really are healing veterans,” he states.